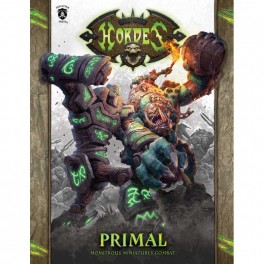 In HORDES, the earth shakes during the fierce confrontations of the colossal beasts that clash head on with devastating force, where fury is your greatest weapon.

HORDES Primal MK III is the essential core rulebook for the third edition of the table top game HORDES rules set. The popular games now plays quicker, easier and more aggressively than ever before. The book includes all the rules you need to play the game as well as detailed profiles, game stats for powerful characters, history of western Immoren and the nations of the Iron Kingdoms and an instruction hobby guide to help you bring your table top to life.

Now take control of powerful warlocks and their horde of fierce warriors and monstrous warbeasts in this fast-paced and aggressive table top miniatures battle game set in the foreboding wilds of western Immoren, home of the Iron Kingdoms.

The rules have been re-invented, the playing field levelled. No veterans or strategy can prepare you for the battle ahead, as the world ignites and war unleashed.

This latest version of the prime rules contains expanded information on the world of WARMACHINE as well as covering the latest miniature releases.

This is the hardcover 344 full colour page English version of the book.

Even the earth trembles as towering warbeasts born to fight and trained to kill hurl themselves at their foes in a frenzy of claw and fang that churns the battlefield into a writhing sea of carnage. Within the bloody fog of war, their battle leaders seize this unbridled rage and from it forge momentous weapons to wield against their enemies, knowing only the strongest, fastest, and most cunning will survive.