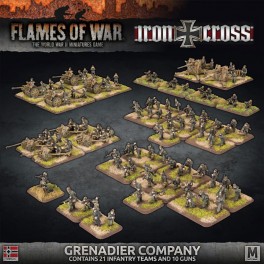 German Grenadier Company (GEAB23)
At the start of the Germans' first assault on Stalingrad on 13 September, the division drove into the heart of the city. The Luftwaffe's bombing campaign had turned most of the city to rubble, and the 295th soon found itself embroiled in vicious house-to-house fighting. Their main objective was the well-defended Mamayev Kurgan, a massive hill in the middle of the city that provided an ideal vantage point for artillery spotting and for directing the battle. It was highly valued by both Soviet and German forces, ensuring the fight for it would be a bloody one. The 295th eventually took the summit, but were relentlessly subjected to Soviet sniper fire and counterattacks from the northern and eastern slopes of the hill. The fighting was savage, as the infantrymen fought with bayonet, grenade, and flamethrower to make any headway against a determined enemy.