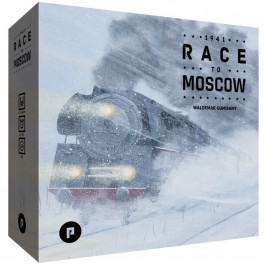 The line between disorder and order lies in logistics is a very sound Sun Tzu quote that perfectly describes the importance of logistics in military operations. This sentence has been an inspiration for the 1941. Race to Moscow, focused on the ‘41 Eastern Front campaign. 1941. Race to Moscow brings the system to a completely new level, with much deeper and more demanding gameplay, as the Eastern Front logistics was a nightmare of horse wagon, truck, and train composed supply columns. What is more, the powerful enemy armies are just across the border, getting ready to launch an onslaught. With the world's strongest army to beat and a difficult logistical puzzle to solve, 1941. Race to Moscow is a dream come true for every wargamer!

Have you heard about the Barbarossa campaign? Logistics were the key to either failure or success.

In 1941: Race to Moscow, you take command of one of the three German Army groups and advance towards Moscow! The game is based on the system used in 1944: Race to the Rhine, but the gameplay is much deeper. Armies are divided into armored and non-motorized, transports composed of trucks and trains. And the enemy — the Soviet army — is terribly strong.

Paladins of the West Kingdom

A War of Whispers

World of Warcraft Wrath of the Lich King Board Game

Betrayal at House on the Hill 2nd Edition

It's a wonderful Kingdom Boardgame