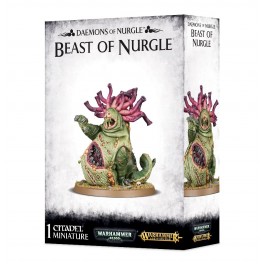 DAEMONS OF NURGLE BEAST OF NURGLE

Beasts of Nurgle are slug-like monstrosities whose enormous bodies are weighed down with slime-slick muscle and blubber. Fanged maws yawn wide in their flesh, and an unspeakable reek wafts from their bodies – but for all their horrifying aspect, they are friendly and enthusiastic creatures. Their minds know nothing of malice or spite, and as they squirm into battle they do not seek to slaughter the enemy but to play with them. Beasts of Nurgle are always desperate for attention, and they hunt down new playmates with rambunctious glee.

This multi-part plastic kit contains the components necessary to assemble a Beast of Nurgle. He doesn’t carry weapons, rather smothering the enemy with his claws, tentacles and slobbering tongue. there are 3 options for his impressive belly, which attach to the single body assembly – 1 with a toothed maw, 1 with a few deep cuts and 1 with a large gaping wound showing a variety of internal organs. There are 2 sets of hands supplied, each featuring 1 hand reaching out with the other steadying the Beast – 1 set is webbed, and the other is clawed, with 2 similar sets of feet. 3 different faces are available, each more manic than the last – 1 featuring a single eye, 1 featuring an icon of Nurgle where the eye should be and 1 with a pair of eyes practically bursting out of the Beast’s skull. There are 2 crests of tentacles, and 2 tongues.

DAEMONS OF TZEENTCH LORD OF CHANGE

HERALD OF TZEENTCH ON BURNING CHARIOT

DAEMONS OF TZEENTCH THE CHANGELING

DAEMONS OF NURGLE GREAT UNCLEAN ONE

DAEMONS OF SLAANESH KEEPER OF SECRETS